What can express the sad waste, the horrors, the grim memories of war? Music can touch hearts that grieve, can console where words may struggle to do so. Yet bugle players may dread annual renditions of The Last Post.

When pressure cracks a note

Nervous string players fear wobbly bows. Clarinetists advertise nerves by squeaking. What worse than shaky fingers right under trumpet players’ eyes? Read my Tips to Conquer the Shakes. Imagine the pressure of a solemn occasion, all ears and eyes targeting the lone bugle player. That, and cold, cost perfectionist Sargeant Keith Clark a note at the funeral for assassinated President John F. Kennedy yet that poignant fluff resonated with the nation.

“I missed a note under pressure,” he said. “It’s something you don’t like, but it’s something that can happen to a trumpet player. You never really get over it.”

A BBC post informs how The Last Post (first published in the 1790s, one of dozens of bugle calls sounded daily in British Army camps) came to be associated with comrades who died. Arthur Lane was a bugler in the British Army who was captured by Japanese forces and worked on the Burma Railway. 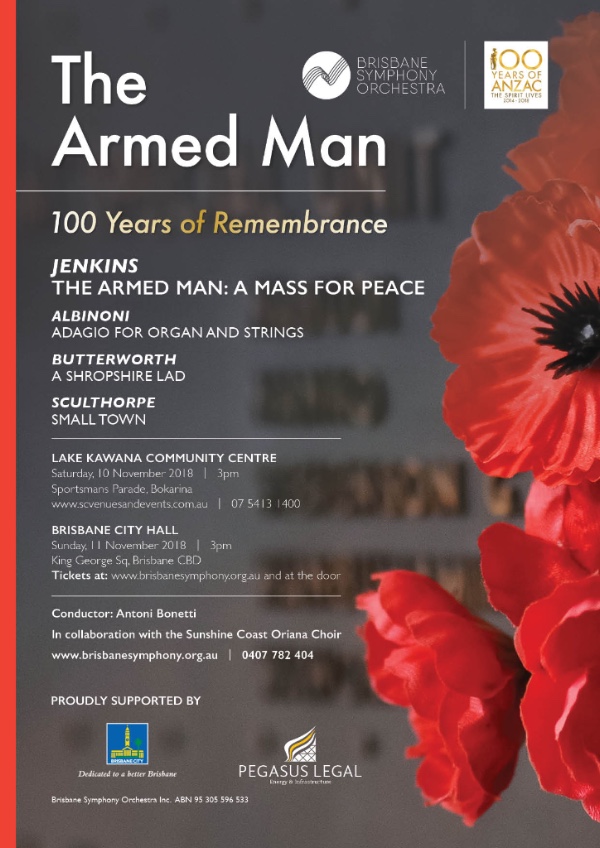 Dedicated to the victims of the Kosovo conflict, The Armed Man is a fitting work to commemorate the centenary of the ending of the First World War. With poignant text sung by a choir and soprano soloist, it is a seamless blend of ancient and modern.

With BSO, I look forward to performing The Armed Man (a Mass for Peace). This was commissioned by the Royal Armouries Museum for the millennium.  It draws on many sources, from the Catholic mass to the Hindu epic Mahabharata, and includes a traditional Muslim call to prayer.

Composer Karl Jenkins quotes lines from the Japanese poet Sankichi Toge, who survived the bombing of Hiroshima, only to die of leukaemia in 1953.  Its title derives from an ancient French song (“l’homme armé”).

Hear Brisbane Symphony Orchestra players tell poignant stories of how war impacted on their families.
My father’s uncle Edvard Back fought for Finland’s Independence during the 1918 Civil War. His son Rolf took 30 patrols across the Finnish border into Russia, on skis in camouflage white. He loved to sing us Russian songs he learned during that time, but his wife told me he often had nightmares about the Continuation War bloodshed.
My great-uncle Karl Johan Back wrote from Australia on 6 May, 1919:
“There were many things I would have liked to write to you during the war but I feared you would be punished for my sins, so I thought it best to write as little as possible.”

Words about music and war

The Cellist of Sarajevo, A haunting novel based on a true story, shows how music can hearten and uplift spirits, even from the carnage, destruction and rubble.
Sunset Ridge: An unusual hero is the war dog Roland, who followed his French twin masters to the front at Saint Omer, Ypres and Verdun, and who rescued many injured soldiers from battlefields.

Read about families divided by war

My 2-part saga of historical biography/memoir tell of my musical journey from shy outback child to professional musician and teacher, interspersed with the discovery of heritage. Available at Amazon,Booktopia, Bookdepository, or www.ruthbonetti.com

Or why not order them in at your local library?